What Black Panther did for me 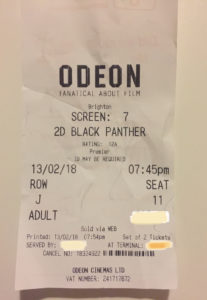 I’d been waiting on the Black Panther film since I saw Captain America: Civil War in 2016. I’ve always been a comic book fan and have indulged my love with the movies over the years. So when it was released in February 2018, I walked into the cinema excited to see what the latest Marvel offering would bring . . . and walked out two-and-a-half hours later, a woman transformed. Black Panther went way beyond descriptions such as ‘good’ or ‘brilliant’; it wasn’t simply ‘fun’ or ‘exciting’, it gave me something new. It gave me understanding.

Understanding of what it’s like to sit and watch a female hero – well, four of them – who looked like me.

I think it’s very difficult for people who as a default see themselves reflected in society and culture to understand why it feels so incredible to view a film or read a book and discover that person looks like you. I also think it’s hard for those who are regularly portrayed as multi-dimensional beings – the hero, the love interest, the complicated villain, the wise advisor, the heartless siren, the kooky beauty, etc. – to understand what it’s like for us who don’t have that happen very often.

More often than not, Black women are the sassy sidekicks, the aggressive interloper, the hyper-sexualised antagonist, the need-to-be-rescued victim. On those rare occasions when we are at the centre of the story, it isn’t about us in all our complex glory, it is about how badly we’re treated by society, it is about the effect of other people’s racism on us and how the other person grows as a result of it. Don’t get me wrong, those things do effect us and are part of our lives, but it’s not all we’re about. And because society is rarely shown that about us, we’re seldom allowed to be the face of a story that is about the universal human experience; hardly ever given the opportunity to be every-woman. This is what Black Panther did. It had multi-dimensional women who had backstories, flaws, strengths, vulnerabilities; hopes and dreams, loves and losses.

I came out of the cinema beaming. For me, Black Panther is a true feminist movie because it gives the female characters their rightful respect as equals to the men in the story and truly celebrates the strength and brilliance of all women.

Over the years Black women and girls have told me that is what my books have done for them. I didn’t truly grasp how powerful and liberating that feeling was until I walked into that cinema and had my eyes opened. Thank you to Chadwick Boseman and the Black Panther family for making that happen for me.