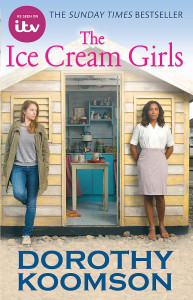 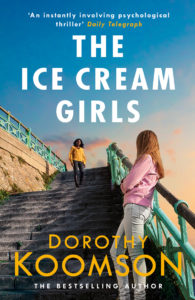 All My Lies Are True, the sequel to my bestselling novel The Ice Cream Girls, is just around the corner. If you haven’t read the book and only saw the TV mini-series loosely based on the book or decide to track down the series to watch instead of reading it, I need to let you know there are quite a few *ahem* differences. These changes won’t make sense when it comes to reading All My Lies Are True (AMLAT), so here are the most important differences to keep in mind.

THERE ARE QUITE A FEW NAME CHANGES Serena is raised a Gorringe and in the book her married name is Gillmare. The TV series changed her married name to Farley. Not sure why, but since AMLAT starts off with someone remembering Serena for having a surname that begins with a G, it’s kinda important to point this out. Most of Poppy’s family – her brother, sister and dad – are also renamed in the TV series. Since they form a HUGE part of the sequel, and for the avoidance of doubt: Poppy’s brother is called Logan and her sister is called Bella.

QUITE A FEW CHARACTERS DISAPPEAR/ARE REIMAGINED In the TV series Serena has a child, a sister and her father disappeared from her life. These original characters from my book are a huge part of the second book so here’s a reminder: Serena grew up in a two-parent family with a mother and father. She has older twin sisters called Medina and Faye who are a big part of both books.

The TV series also makes Poppy the product of a single-parent family (do you think there’s a stereotype they were trying to shoehorn in or something?) with an evil step-father. In the book, she actually has two parents and was closer to her father than her mother. The destruction of her relationship with her father due to going to prison is one of the core elements of Poppy’s story arc in the first book and carries on into the second book.

CHARACTERS MEET/HAVE CONVERSATIONS THAT DIDN’T HAPPEN In the book, Poppy stalks Serena and finds a spurious reason to meet Dr Evan (Serena’s husband) but doesn’t let on that she knows Serena. In the TV series, Poppy does tell Evan she knows Serena and she also tries to befriend Serena’s daughter, Verity, which doesn’t happen in the book. Serena also has a huge confrontation with Alain, Poppy’s lover, about him being a journalist, then tells Poppy about it. In the book, Poppy finds out Alain’s secret when he confesses to her at a crucial moment in their relationship. There are very good reasons why none of these things happened in The Ice Cream Girls book – mainly for plot and plausibility reasons. But, also, if any of these things had happened, there’d be no All My Lies Are True. So, disregard all of these changes from the TV series when you read the sequel.

SERENA SPENDS A LOT OF TIME ANGRY AND SHOUTY I’m not sure why the TV series made her that way. . . Actually, I’m being disingenuous – I do know why: they fell into the tired old trope of Black girls being shouty, aggressive and oversexed and then growing into cold, shouty, aggressive women. But, there we are. The Serena in my book is a quiet, shy, thoughtful girl who doesn’t flirt with and seduce her teacher but instead is manipulated, groomed and ultimately abused by a man who knew she would keep his secrets. She grows up into a quiet woman who avoids trouble and focuses on bringing up her children in a stable, happy environment. She loves her husband and she is quiet and unassuming. Very different from the Serena we’re shown on screen.

POPPY HAS VERY LITTLE DRIVE In my book, Poppy was decisive and clever enough to find and stalk Serena, but we see none of that in the TV series. She seems to spend a lot of time waiting for things to happen to her, and I think that was because the core of her story – the relationship with her family – has been removed. In The Ice Cream Girls book, Poppy has drive and ambition and is in charge of her own life, despite living with the constant threat of being sent back to prison. That is a part of her character that is essential for the sequel to work.

MARCUS IS THOROUGHLY UNLIKEABLE In the book, Marcus is charming and manipulative. He grooms and seduces Poppy and Serena before he starts to abuse them. You see very clearly how and why they fall him. In the TV series there is very little evidence of charm, he mainly uses shouting, violence and brute force to get what he wants. It’s hard to believe anyone would go near him, let alone two young women.

EVAN LEAVES WITH VERITY When Serena’s past is revealed in The Ice Cream Girls book, Eva is so incensed by her lies that he forces Serena to leave. In the TV series, he takes his daughter and walks out. Not a significant difference you might think, but it is for the sequel – there’s a pivotal All My Lies Are True scene based on where Serena ends up when she is thrown out. I often wonder if the TV series did this to give Serena another chance to shout at someone. Hmmm.

THE ENDING/KILLER IS DIFFERENT I’m not going to spoil the TV series for you. Only a monster would do that. But a sequel, this sequel, just would not be possible with the ending of the loosely based adaptation. I had many, many issues with the ending that I can’t discuss because I’m not a spoiler monster, but know this – the ending is not the same. It comes from left-field and I don’t think it works, even for the way the adaptation has altered my original story.

I have to state that there were some outstanding elements to the loosely based TV adaptation: some of the cinematography was stunning; and the acting was excellent. I think the actors did a fine job with the material they were given.

But it was the material they were given that I had the real issue with. The Ice Cream Girls, like all my books, was a labour of love. I particularly sweated over this one trying to get the abuse storyline right by attempting to show that it could happen to anyone. Not those ‘others’ we’re stereotypically shown to be abused; I wanted to illustrate that any one of us could end up in a situation like Serena and Poppy. To watch something with my name on be used to perpetrate negative tropes and stereotypes was a bitter pill to swallow. . . and, yes, it still stings all these years later.

I should add, though, that if you enjoyed The Ice Cream Girls TV series, there is no shame in that. I’m genuinely pleased for you. It was a good, solid TV drama (stereotypes excluded) and I might have enjoyed it, too, if I hadn’t heard all those stories about people’s real, lived experiences.

Either way, I hope you feel all caught up now, and you’re All My Lies Are True, ready. If you want to know more of my thoughts on the Ice Cream Girls TV series, then click here and read: The Two Ice Cream Girls.

All My Lies Are True is on sale from 9 July.