Read this guest post by Sharon Wright about her book, The Mother of the Brontës: When Maria Met Patrick 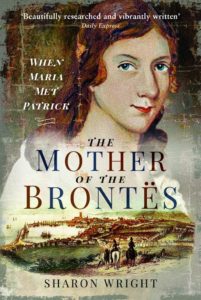 I wrote the book that could never be written. Writing it took over my whole life for a long while but The Mother of the Brontës: When Maria Met Patrick is definitely, definitely written.

So, I’m the author of the first biography of Maria Branwell, enigmatic mother of Charlotte, Emily and Anne Brontë. Why first? Because everyone else thought it couldn’t be done. While countless biographies have been written about the Brontë sisters, their brother Branwell and father Patrick, not a single life of marvelous Mrs Brontë existed before I came along. That didn’t seem right. That didn’t seem fair. This fascinating woman gave life to the most gifted literary siblings the world has ever known, then vanished for almost 200 years. Who was she? And why had nobody gone looking for her? And just what was her influence on the masterpieces of the daughters she left behind, Maria’s legacy hidden in Wuthering Heights, Jane Eyre, The Tenant of Wildfell Hall?

To be perfectly honest, I didn’t realize just how convinced people were that a Mrs Brontë biography was mission impossible until many and various Brontë fans and experts told me, truly delighted to be proved wrong, when the book was published. Perhaps ignorance is bliss. Perhaps not. Perhaps a long career in journalism just makes you a bloody-minded nonfiction author – bloody-mindedness always magnified by being from Yorkshire. To be fair, when I first wondered aloud why no-one had ever written a biography of the neglected mother of genius, the answer did come swiftly: “There isn’t enough on her.” But telling a journalist there’s no story is the single most effective way to send her scooting off to find it. She just doesn’t believe you. Because everyone has a story, don’t they? I bet there is enough, I thought, if you go looking properly.

When I embarked on my bid to rescue Maria from obscurity, her location in the Brontë story was… nowhere, really. We knew a few sketchy details. She was born in Cornwall and she died a young mother of six in Haworth, everything else was shrouded in mystery. Even the information boards at the Brontë Parsonage Museum refer to her as “a shadowy figure”.

So off I went with my notepad and pen. Like the Brontës, I was born in Bradford and as a cub reporter I had covered Haworth for the local paper. It was wonderful to now visit the Parsonage as a bone fide researcher, getting to know the wonderful staff as they helped me comb the Brontë collection for the sparse evidence of Maria, once mistress of the home that’s now a shrine to her family. Then I set off to travel the country, getting lost for hours and days in obscure historical archives doing original research, walking in Maria’s footsteps across the West Country and the West Riding, solving age-old Brontë puzzles and unearthing some startling family secrets. Untold time went on tracking down all the pieces to the puzzle, ferreting around in dusty records, persuading people to let me look around their homes and schools and churches, exploring Maria’s turbulent world of the late eighteenth and early nineteenth centuries.

As I worked on, consumed by my relentless quest, Maria began to step out of the shadows. My secret life plan, codename: Hiding In Libraries, was working. Meticulous original research allowed her life to take shape on my page. And what a life it was, with more real-life drama than a Brontë novel or episode of Poldark. A cast of unforgettable characters, Gothic fiction and haunted houses, a bigwig father in business with smugglers, a mother placing too many babies in the grave, a poor sister married to a ‘bad man’, Enlightenment ladies’ book clubs and balls, a social life not unlike her contemporary Jane Austen. Then a plucky decision to take a dangerous 400-mile journey by stagecoach and that unlikely, fateful meeting in Yorkshire with a handsome Irish parson she called her “dear, saucy Pat”. The rest is history except, somehow, Maria was lost in the telling.

Most of all I was writing a love story, one with world-changing consequences for us all. Going back to book names for a mo, my working title was always simply ‘When Maria Met Patrick’. When Maria Branwell met Patrick Brontë in real life, it meant one day Cathy would meet Heathcliff and Jane Eyre, Mr Rochester in the books of their children. Maria’s gifted daughters would quite literally write themselves into history. It was only fair that someone should write hers. Her life as a clever, witty and brave bluestocking was shot through with hope and adventure, radicals and writing, smugglers and shipwrecks, Regency romance and tragedy. I knew I was writing the untold Brontë backstory, the key to it all. The illuminating prequel to the far better known life stories of her brilliant brood and heartbroken man.

I went looking properly for the remarkable, forgotten Maria Branwell Brontë – lady of letters, lover of Patrick, mother of genius – and I found her.

* The Mother of the Brontës: When Maria Met Patrick (Pen and Sword) by Sharon Wright is out now in paperback. Click here to buy.